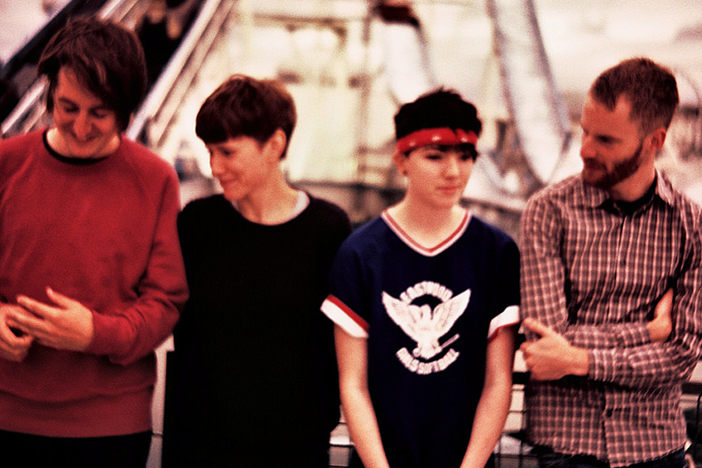 The year began with more Brighton bands than ever getting tipped for success in 2014, not that a sparse January calendar has presented many opportunities to check out the contenders. Headlining this evening’s busy Put It On show, The Hundredth Anniversary are more softly spoken and less forcefully marketed than many of their contemporaries but a sold out debut 7” (‘The Jump’, for Gateshead micro-indie Tiny Lights) and a late NME nod before Christmas have helped build a wave of interest.

Following the hectic garage of I Like The Go Go (and a non-appearance from Brummie guests The Grafham Water Sailing Club, broken down en route), The Hundredth Anniversary arrive on stage with a stormy rumble of drums and slate-grey chords. The noise resolves into the stark beauty of ‘Last Drive’, Eleanor Rudge’s vocals gliding over Andy Taylor’s casual guitar cascades.

Rudge can also be found singing with noisy indiepop tykes Tyrannosaurus Dead (there’s a tight bind between the two groups that includes shared EPs and sibling relations) but The Hundredth Anniversary are a far less frenetic band than their Oddbox buddies. With songs pitched somewhere between the grandeur of Galaxie 500 and the desolation of Low, the pace is slow and stately, rising to peaks of shimmering dreampop. Songs like ‘Pressure Sphere’ and ‘34’ take on a raw and unsettling hue live, while the blue sky wonder of ‘The Jump’ is more open-hearted and uplifting.

Finishing with the rapid and rattling ‘It Becomes Us’ (from a forthcoming EP) they exit to a surprise rush of high-fives from the crowd. They’d kept schtumm tonight, but a few days later a stripped-down Daytrotter session brings a whole new level of international exposure. It’s quite possible The Hundredth Anniversary are taking the year by stealth.

Stuart Huggett grew up in Hastings, writing fanzines and blogs about the town’s underground music scene. He has been a regular contributor to SOURCE, NME, The Quietus and Bowlegs. His huge archive of magazines, flyers and vinyl is either an invaluable research tool or a bloody pain. He occasionally runs tinpot record label Dizzy Tiger, DJs sporadically and plays live even less.
← PREVIOUS POST
The Wytches sign to Heavenly
NEXT POST →
Warpaint Review
Mailing List
Recent Posts
Website developed in Brighton by Infobo
Copyright © Brighton Source 2009-2020
The Hundredth Anniversary Review - Brighton Source